Home > Information > The Anthropology of Rubbish and Recycling

The Anthropology of Rubbish and Recycling 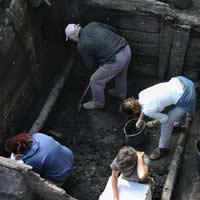 Anthropologists and archaeologists the world over and particularly in the UK and US are now turning their investigations on to how societies have disposed of their rubbish over the centuries and what that rubbish actually was. Not many people would want to crawl around on rubbish dumps, but this is the way to discover what our ancestors ate, and the materials and objects they used.

A select group of researchers are also investigating landfill sites from our age – they drill down into sites that have only recently been closed and covered, and investigate our rubbish habits from the past generation or so. This brings up fascinating results: how long certain materials can take to break down for instance, or if there is a concentration of one type of material, or even product, that was more common to rubbish at a certain time being studied.

This project was started in 1973 by Dr William Rathje in Tucson, Arizona. It was intended as both an archaeological and sociological study of how society lives today. Ultimately, it studied patterns of human consumption, using both questionnaires given out to householders, and the physical evidence of emptying out the same householders bin, and examining their rubbish.These 2 examinations did not always tally, for example a main finding was that householders alcohol consumption was higher than given on the questionnaire – the physical evidence from the rubbish proved otherwise!

The project continues, and has branched out to other Cities. It has been covered a lot in the media; Rathjes has written up his experiment in the best-selling book 'Rubbish!', and his work has spawned the title 'Garbeology', which is now applied worldwide to this field of examining the social, ecological, and environmental aspects of our rubbish.

The Span of Human History

The study of what we find in the ground can tell us so much about our ancestors – the type of food eaten, whether they were hunters or pastoralists, whether clay was the predominant material used and the different production methods of pottery.

From recent excavations on the Scottish island of South Uist, which has shown that the waste was clustered in the centre of the settlement, rather than on the outskirts – possibly due to fears of soil erosion; to current explorations of a neolithic campsite from 30,000 years ago, in the Carpathian mountains. The team working there have uncovered large remains of reindeer, mammoth, wild cow and even cave lion bones. This site in particular has provided groundbreaking new clues about the social structure of a community – their use of fire, both in cooking and for ritual purposes, and the preparation and sharing of food.

Understanding Ourselves, and Seeing the Growing Crisis

It can be astonishing to read the research and discover what we can understand about our ancestors, purely from the rubbish they left behind, all those years ago. Unfortunately, the view from the future looking back to our generation, here in the 20th century is much bleaker.

We have developed materials that take thousands of years to break down, and we are using them in such abundance that we are constantly in need of more land to dig holes in to bury all our rubbish!