Home > Information > The Art of Recycling

The Art of Recycling 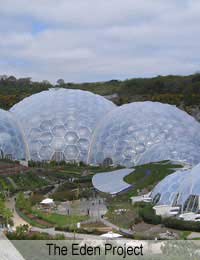 Collecting objects that would normally be thrown away and converting them into art, has long been a favourite technique of many artists.

This practice is now much more widespread, and with the growing awareness of the urgent need to reduce, reuse and recycle, art from recycled goods now has a more politicized nature to it. It is often used to campaign for the conservation of resources, that underpins the whole call for recycling.

From the long running children's TV show 'Blue Peter', that taught us how to make spaceships and cybernauts from our mothers discarded kitchen roll tube, to the stark message of writer Ted Hughes' book 'The Iron Man', where a creature is assembled from waste metals and scrap materials, the message has been drilled home to most of us of the sixties generation: be creative, but change our wasteful habits.

Examples of Art Made From Waste

Browsing some catalogues of recent worldwide exhibitions, and doing an online search, we found some of the following examples:

Getting Immersed in Waste, Creatively

It’s wonderful to experience how much fun it is to create art and objects from everyday waste.

Start by taking a class at your local college or community centre, perhaps in paper-making, or a general craft-making session, or buy a readily available book that teaches you how to do it.

The only problem is, you'll need to create lots of space for all the waste you would usually throw away – by keeping it in order to make things with it, you'll soon realise just how much gets chucked out on a daily basis. But by going ahead and being creative with your waste – cardboard, plastic bags, packaging, materials, or paper perhaps, you'll be making something beautiful and educational to show off and get everyone you know recycling creatively too!

China Goes Green in Recycling Effort
Share Your Story, Join the Discussion or Seek Advice..
I remember as a child melting expanded polystyrene with plastic glue and wondered if a domestic / small unit had been developed that allows us to dissolve the expanded polystyrene, rather than allowing it to break apart and scatter across the fields and onto our water supplied and the sea. The dissolved material would have to be collected to be recycled / reclaimed into the plastics industry. I realise that the fluid would most likely be toxic, however the upside would outweigh the thousands of years and ongoing biological, food chain and toxic pollution associated with these products.
city35 - 19-May-15 @ 12:32 PM
Title:
(never shown)
Firstname:
(never shown)
Surname:
(never shown)
Email:
(never shown)
Nickname:
(shown)
Comment:
Validate: