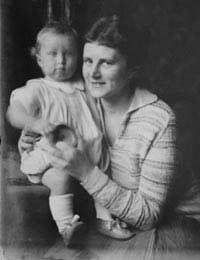 “Make do and mend,” we called it, remembers Denise Mansell, “so all this recycling malarkey that everyone’s going on about these days isn’t that new!”

She’s typical of a breed of resourceful women who, seventy years ago, with Spitfires zooming over their heads, bombs dropping about their ears and the threat of invasion looming, came up with a range of clever ideas to keep life on the home front ticking along as best they could. While their husbands marched off to war, they were left to develop their own ingenious solutions to the wartime shortages that ravaged everything from lipstick to linen.

“It was all about coupons – if you wanted a new winter coat, you wouldn’t have enough coupons left to get new shoes. You had to make some hard choices, but you looked after what you had – and found ways around the rest.”

Those ways included making coats from old, grey, army blankets and unpicking adult clothes to make things for their children; the sewing skills of this generation must have been something to behold! “We were all good at sewing; you had to be,” she explains. “There was a saying ‘patch and darn’ and we really meant it. You often ended up darning the darns – and sometimes more than once!”

For tablecloths, pillowcases and even short curtains, flour bags were bought from the local bakers for the princely sum of 6d (2.5p!) and then bleached, washed and embroidered to pass muster. With leather almost impossible to get, when it came to preserving shoes, recycled bicycle tyres were cut into strips and stuck on to the soles and heels and if you hadn’t the necessary coupons to buy your stockings, out came the gravy browning to dye your legs and an eye liner to add that all important seam. No lipstick? They even had an answer for that – beetroot juice – “beetle juice, we called it,” laughs Denise.

There might have been a war on, but these ladies were determined to look their best and they were definitely not about to let their standards slip!

The list of kitchen staples that were rationed – including meat, eggs, butter, margarine and cheese – would probably be enough to give the likes of Delia Smith or Jamie Oliver an anxious moment or two. For Denise and her contemporaries, getting food on the table often called for more than a spot of ingenuity – and she’s understandably contemptuous of the eight million tonnes of food today’s British households throw out every year.

“Everything was re-hashed. If you didn’t eat all of it today, it would be made up into something different for tomorrow. We couldn’t afford to do anything else. If you got yourself a joint – and boy, was that a rare event – then you’d scrape every last bit you could off it and mince it to get another meal out of it. That, and buy bones from the butcher to boil up for broth. Always a good bit of meat left on those bones!”

She’s also faintly amused at the modern zeal for growing your own food, especially as she says “when people carry on as if it’s such a terribly modern thing to do.” Her father, a keen gardener and veteran of the previous conflict, dug up his beloved flower beds to plant vegetables. “There was a slogan ‘Dig for Victory’,” she explains. “I think he took it rather literally!”

“They were strange times,” she recalls, “I mean if you saw a queue, you’d join it. You wouldn’t know what you were queuing for – but you’d queue anyway in case it was something you wanted. It was all very orderly – no barging or any of that carry on. I met some lovely people in those queues.”

Waste Not Want Not

“Even before the war, we were always careful. Ordinary people didn’t have the sort of money they do today and anyway, things just weren’t so available. No ordering things on the internet! If you wanted something that you couldn’t get in the local shops, you had to make it for yourself and we’d always collect good containers to put things in – you’d never dream of throwing things away. All my father’s nails and screws were kept in old jam jars – a different jar for each type. That’s the sort of world it was; waste not, want not. You just didn’t think anything of it – and these days I get letters from my local council telling me how I must recycle more. You have to laugh, I suppose.”

It’s easy to understand why she finds it funny, but there is a serious side to what she and the other wartime wives can tell us. There is a saying that those who do not learn the lessons of history are condemned to repeat its mistakes. We’d better listen to the likes of Denise, then; after all, they’ve been reusing and recycling since long before most of the rest of us were born!