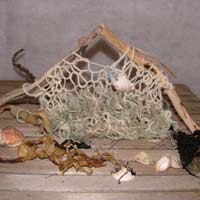 For most people, the assorted flotsam and jetsam discarded by everything from cruise ships to fishing boats, coupled with the scattered remains of more mundane rubbish that litters the foreshore of Pearl McIver’s local beach would be an unwelcome sight. To her, however, it represents a whole world of creative opportunity – for Pearl is a knitting artist, incorporating some of the broken and unwanted items that regularly wash up on the shore into what she calls “recycled 3D fabric art”.

“I’d always been interested in sculpture and modern art, but I’d never really had the opportunity to explore it. When I retired and moved up here, I thought – here’s my chance!”

Modern art installations undoubtedly encompass a wide range of media and avenues of expression, so while Damien Hirst pickled sharks and Tracey Emin exhibited her bed, Pearl chose to go back to what she knew – and for her, that meant knitting.

“It happened by accident really,” she explains. “I was walking along the shore one day and spotted the remains of a mangled old lobster pot. The wood was shattered and the nylon netting was all tangled with gull feathers and kelp and I thought – that reminds me of a bit of old knitting that you’d forgotten about. And that was it; I’d found my inspiration!”

Since those first tentative attempts to meld quality yarns with seashore rubbish and create something wholly new – which she says herself, “weren’t actually very good” – Pearl has come a long way. Today, what she once did solely for her own pleasure has become a bit of a money spinner.

“Yeah, it’s true,” she laughs “I’ve sold myself out and become commercial! Well, hardly – but I do make a few pennies on the side, which is nice, mostly because it means somebody else likes it and I think I’m doing my bit for the planet too. I mean, if someone will actually pay you for something that’s basically made from a load of old rubbish – although I do wash it all first, obviously – well that’s added value, isn’t it? That’s got to be recycling, now hasn’t it?”

There’s no denying that she does have a point.

So how exactly does she approach her task, and how does that ‘load of old rubbish’ actually get turned into art?

“To be honest, I don’t really know,” says Pearl, “it just sort of happens. I’ll see something that catches my eye when I’m walking along, perhaps a bit of a broken float, or a few strands from an old fishing net, and it’ll just say ‘hello’ to me. Usually by the time I’ve got over to it and picked it up, I know what I’m going to do with it. That’s not always true; sometimes it only gets to be clear once I’ve taken it home. Then, it’s as if it speaks to me, which I know probably sounds a bit dotty, but there you are – that’s me all over!”

One thing’s for sure, whether you live by the sea or in the middle of the city, there’s no shortage of rubbish swirling around the environment, so any aspiring artistic recyclers will never be short of raw materials or inspiration. As Pearl says, “each new tide brings me something different” – but does she have any tips for anyone starting out?

“Never be afraid to experiment, to try something different. Be bold; it doesn’t really matter if nobody else likes what you do, or even if you hate what you’ve done – I know I did many times. It’s all about the journey and you’ll always learn something along the way. When you work with recycled materials, you have to look at things, even everyday objects, differently. You’re changing it, but it’s changing you too – which can seem a bit weird until you get used to it.”

In the end, though, she says it’s mostly about having fun. Can recycling ever get any better than that?