Haiti's Earthquake Changed My View of Recycling: A Case Study 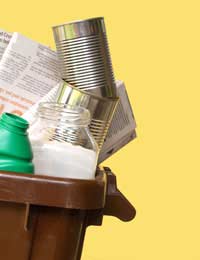 “What I knew about Haiti, I’d learnt from my grandmother,” admits Odette Saint-Baptiste, “but nothing prepared me for what I saw stepping off that plane. We always say that people in disasters have ‘lost everything’ – but it was absolutely true. They had nothing; perhaps even less than that!”

A second generation French citizen, but working in the UK at the time, Odette watched in disbelief as the full implications of the magnitude 7 earthquake began to become apparent. As a nurse, she knew she could do a lot to ease the suffering of the people back in a country that she had always almost thought of as home, so a phone call or two later back to France and she’d wangled a place on one of the relief teams.

The quake only lasted about 30 seconds, but the devastation it wrought to the fragile infrastructure of one of the world’s most heavily populated countries – and probably the poorest in the Western hemisphere – was enormous.

“There was no power, no water, no food, no shelter, no transport – for many Haitians these things are never easy, but now it was impossible. Then there was the growing risk of disease – malaria and typhoid, of course, but even diarrhoea could kill thousands without proper sanitation or clean water.”

“Little by little,” she explains, “we did what we could to help. It could never be enough, the problem was so big, but what really struck me was the attitude of the people. There was anger, of course – ‘why are the government not helping’ and so on – but generally there was determination to carry on, even when it seemed so hopeless, even some humour too.”

Odette was also struck by how even the simplest items lying discarded could be pressed into new service and how inventive the local Haitians had become in finding new uses for unwanted objects.

“It started with cardboard boxes for shelters – which is pretty obvious – but then all sorts of things were happening. Lamps were being made out of old food tins, cooking ovens from car wheels and I could not even begin to say how many different things were used to carry precious water.”

“I had always recycled because it is what you do – in France and in Britain too – but that was all,” she confides, “but Haiti really changed my views about that. I know what a difference it can make when you have nothing. How important it can be to have something and to be able to do something positive, even in a small way. I really cannot throw anything away now if it can possibly be used again. I cannot bear it!”

The charity shops in and around Aberdeen have certainly benefitted from her conversion and Odette now describes herself as a “truly passionate” recycler, enthusiastically feeding all her cans, bottles and cardboard into the appropriate council bins. She is shortly to return home to France, and fully intends to keep up the habit there.

There’s one thing she won’t be recycling or throwing away, however, no matter how worn it gets – and that’s a T shirt bearing a slogan in Haitian Creole that reads "Ayiti pap peri " (Haiti didn’t die). One of hundreds hastily printed on the devastated streets of Port-au-Prince, it was given to her just days before she left by the father of a young boy she’d been treating.

“It made me think, if this man who has nothing can be so generous, I who have so much back home should not be so wasteful. I think it was then that my change of heart really took hold. Pap peri – but very close!”