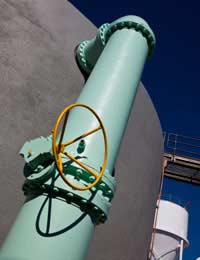 Sewage treatment isn’t rocket science, but if NASA’s latest idea for recycling wastewater is anything to go by, sometimes it can get pretty close! America’s space agency has been looking at the question of what to do with sewage on long-haul missions across the solar system and beyond for some time, but now it seems that one of the possible solutions they’ve come up with could make its biggest mark right here on earth. Perhaps best of all, if everything goes to plan, it’s not just a better way to deal with sewage itself; it could offer a cheap way to produce significant amounts of clean, green energy too.

The system came about as part of NASA’s “Spaceship Earth” project and algae are the key to making the whole thing work.

At its core lie huge containers, like giant plastic bags, filled with sewage and floating at sea, within which a green, pyramid-shaped micro-alga, rejoicing in the scientific name Botryococcus braunii is allowed to grow. The principle is very simple; the nutrients in the sewage provide the minerals necessary for the algae to grow, and ultimately the algae can itself be harvested – and this particular kind lends itself very readily to being made into biofuel substitutes for oil, petrol, diesel and even aviation fuel.

The idea of producing energy from algae is not a new one – in fact, it’s been around for decades in one form or another, and it’s easy to see the attraction. A range of land plants have the potential to be used in a similar way, but while the likes of soy and palm respectively provide around 40 and 500 gallons of oil for every acre of crop, algae can yield 1,760 gallons – more than three times as much as the best of them! Unfortunately, however, actually achieving this is more difficult in practice. You need a lot of land to house the large lagoons or huge bio-reactors necessary, keeping the contents properly mixed is difficult, maintaining the ideal temperature for algae is tricky and the whole thing costs a fortune to build.

“The inspiration I had,” says Jonathan Trent, the Spaceship Earth project leader, “was to use offshore membrane enclosures to grow algae. We’re going to deploy a large plastic bag in the ocean, and fill it with sewage. The algae use sewage to grow, and in the process of growing they clean up the sewage.” The membranes he’s speaking of are made of forward-osmosis membrane material – a special semi-permeable fabric which allows fresh-water and gases to leave the floating plastic bags, while stopping seawater from getting in, and killing off the algae. A similar sort of idea is used in many of the world’s desalination plants which make drinking water from seawater, though in this case the process runs the other way around.

Putting the whole system into the sea also helps overcome the other problems associated with land-based algal growing; seawater helps stops the temperature from fluctuating too wildly, while the action of the waves and the tide keeps the ‘soup’ well mixed – without the need for pumps, paddles or external power.

Known as OMEGA – offshore membrane enclosures for growing algae – this new approach has been patented and licensed to Algae Systems, a company who intend to start using it commercially very soon. They have great hopes for it, as Matthew Atwood, the president and founder, explains. “The OMEGA technology has transformational powers. It can convert sewage and carbon dioxide into abundant and inexpensive fuels. The technology is simple and scalable enough to create an inexpensive, local energy supply that also creates jobs to sustain it.”

The two most obvious rewards will be the biofuel produced and the pollution-free, low energy treatment of the sewage/wastewater but OMEGA holds further promise too. The algal remains after harvesting can be made into a variety of useful by-products, including agricultural fertilisers, some kinds of cosmetics, mineral supplements and animal feed. Even the bags themselves will be usefully reused once their expected two-year lifespan is over, being made into a horticultural mulch material or soil amendment. As recycling projects go, it’s a pretty comprehensive one!

Aside of its benefits here on Earth, on a rather smaller scale, some of the technology could possibly be used in space, either in some future human base, or as one of the components in the life-support system aboard a mission of exploration to the stars. It’s tempting to think that perhaps one day we might even travel to Star Trek’s “final frontier” in spacecraft powered – at least in part – by astronaut poo.

Now, whatever would Mr Spock have had to say about that?