Home > Landfill > Nappies and the Environment

Nappies and the Environment 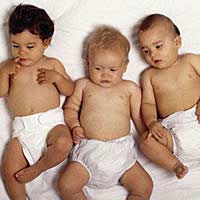 Babies generally need nappies for the first two and a half years of their life until they have gained complete bladder control. Up to that point, studies from the Government Environment Agency in 2005 show that they will have produced in the region of 254 litres of urine, and 98 kilograms of faeces.

Taking the research further, this means each baby using 4.16 nappies a day, or 3,796 nappies per baby for the two and a half years! This is 8 million nappies being disposed of per day in the UK.

On top of the that, the weight of 3,796 fresh nappies is 169.5 kilograms. That weight shoots up to over 500 kg when used. This finally amounts to over half a million tons of waste in the UK every year – from just this one source. So the scale of the nappy problem, in its easily disposable yet massively problematic and polluting way, is a big one.

The Environmental Impact of Disposable Nappies

The main components of disposable nappies are cellulose fibres and polymer. These are both non-renewable resources, and consume a lot of energy in production. Both materials need a lot of water in production, but perhaps worst of all, take a long time to break down once in a landfill site. The potential toxicity of the chemicals from the disposable nappy, as well as from the mix of faeces and urine, leaching into aquatic and terrestrial systems once they have been put in landfill, is a dangerous hazard, with harmful consequences both to humans and the environment.

The Alternatives: Disposable vs Reusable

Disposable nappies are easy to buy, come in many shapes and sizes for different babies, are cheapish, and easy to dispose of.Reusable nappies are usually bought via special retail stores or via the internet, and are more expensive. The general formula for them is a soft cotton nappy, with a liner, and waterproof, breathable wraps around that. These nappies are often soaked in a sanitising fluid before being put through the laundry, and can then be tumble-dried or air-dried. The regular washing tends to make them slightly less waterproof than disposable nappies.

Nappy laundering services are more and more common these days – ask other mothers or ask at your local mother and toddler group. For a weekly or monthly charge, the nappies will be collected from the doorstep, cleaned and returned. The amount of water and electricity used in the laundering of reusable nappies, either at home or by a collection service, is the main environmental impact of using these nappies. A mother concerned about the impact upon the environment has to balance the impact of the amount of disposable nappies going into landfill, or being responsible for using a lot more water and electricity than usual, by preferring the reusable type.

Recycling and Reusing: the Nappy Debate

There are some further ways to reduce the environmental impact of using increased water and electricity by using reusable nappies. These include:

Ultimately, a parent must consider the (relatively limited) option in the nappy debate.But it is likely that most parents wouldn't want to hand on to their children a horrible legacy of environmental pollution – caused by the current generation’s easy disposable attitude.

A legacy of the attitude embodied in the phrase 'reduce, reuse, recycle' is ultimately more beneficial to the nappy-wearers of today.

More Environmentally Friendly to Use Glass Milk Bottles?
Share Your Story, Join the Discussion or Seek Advice..
I've used reusable nappies since birth, and there was very little I recognised in this article about what it is *actually* like using cloth nappies! Absolutely no-one advises having to soak soiled nappies! And although I am a big fan of the two-part nappy described, there are many more varieties of nappy for the modern parent - many are 'all-in-one', going on as easily as a disposable, with velcro or poppers. I wash at 40 degrees, every 4 full days, and only use an airer - that's only one nappy wash a week. In fact, I do more laundry of food-stained clothes, and general baby mess, than I do nappies! A modern, energy efficient machine does all the work, and it doesn't even need to be 'women's work', either, as my husband is perfectly capable of doing a load, too! I'm very annoyed by the assertion that cloth nappies are less waterproof. I've had a handful of minor leaks in more than 9 months, whereas friends who use disposable nappies were regularly plagued by horrific blow-out 'poonamis'. As it happens, my poor baby has a tummy bug this week, but when I had to go out today I was so confident that his nappy would contain his diarrhea that I even wore him in the sling. I strongly suggest gaining some real experience of cloth nappies, or at least speaking to those who do, and amend the article accordingly.
Clare - 12-Dec-18 @ 10:26 PM
I haven't seen any cloth nappy brands that recommend soaking in sanitising fluid before washing. I tried a lot of brands before settling on the ones I like best, and all of them said store dirty/wet nappies DRY in a nappy bucket, before washing at 60 degrees maximum. The out-dated notion that cloth nappies have to be soaked before washing is one of the things that puts parents off using reusable nappies... (As a side note on how easy cloth nappies can be: I also wash nappies and baby clothes together and have enough nappies to wash every 3 days, so I'm really only doing one more laundry load a week than I would anyway.)
boo - 5-Sep-18 @ 12:09 PM
I always was wondering where all the nuppies go after being used, as they are really take more time to degrade in landfill. I think that reusable hippies need to be more advertised, so all the people know about them and halo environment.
??? - 21-Nov-17 @ 8:53 PM
Title:
(never shown)
Firstname:
(never shown)
Surname:
(never shown)
Email:
(never shown)
Nickname:
(shown)
Comment:
Validate: