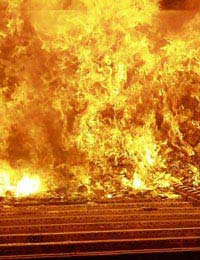 Wherever you look, there are opportunities to recycle and these days a growing proportion of our waste is recycled. Never-the-less, as a country, Britain produces a far greater volume and more kinds of waste than can neatly and cleanly fit into our kerbside recycling boxes, composters or bottle banks. The upshot of that is that there will always be some types of waste which can only ever end up needing disposal – whether that’s because they’re made of too many different materials, the technology doesn’t exist to reuse them safely or they’re just too soiled to be reclaimed. As a nation, the UK has always had a very heavy historical dependency on landfill and, inevitably, it was to such sites that most of the waste destined for disposal would be sent.

Elsewhere in the world, other methods of disposal have proven more popular, with incineration being one of the most commonly used, leading some people to suggest that it could make a good alternative to landfill for British waste too.

It certainly has its advantages over landfill. For one thing, it avoids many of the associated high cost issues. A modern sanitary landfill requires a major programme of lining and groundwork, the installation of a leachate collection, recovery and treatment system and gas collection pipes and equipment. None of that comes cheap.

In addition, these economic factors tend to favour the construction of massive landfills to service an entire region’s waste, which brings with it problems of visual impact, huge numbers of vehicle movements and the likelihood of a lengthy operational life. Unpleasant smells are an unfortunate, but unavoidable, feature of landfills from time to time and perhaps most importantly of all, they generate huge quantities of methane-rich landfill gas over their lifetime. Understandably, no one really wants to have a landfill on their doorstep.

Incinerating waste also offers a way to recapture some value from the resources being disposed of, since modern incinerators are very efficient at capturing the energy generated. Many of the most successful form part of a district heating scheme, where the heat produced is then provided at a highly competitive rate to local businesses and sometimes households too in the immediate area of the plant itself.

The volume of residual ash that is left after the incineration process is considerably smaller than the original waste that arrived, so although it still requires to be landfilled or disposed of in some other way, it doesn’t require anything like as much space. With the amount of landfill available facing an ever-increasing demand and new landfills being expensive to build and often difficult to locate without community opposition, this helps provide good long-term security for managing an area’s waste.

Despite this, incineration is not without its downside. Building an incinerator is not without some cost issues of its own and requires significant investment both in the fabric of the facility and the technology to ensure that “clean-burn” really is clean. Although the process yields a much smaller volume of residual ash for final disposal, it will have concentrated many of the hazardous chemicals that were present in the original waste, so finding a suitable means of disposal easily is not necessarily a straightforward task. In addition, incineration can sometimes cause a loss of recyclables – particularly readily combustible ones – since it is important to maintain the calorific value of the waste entering the incinerator for operational reasons.

Perhaps the strongest disadvantage, however, lies in public perception and few things seem to provoke such strength of feeling as the prospect of a new incinerator. Despite considerable advances in ‘scrubber’ technology – the systems designed to eliminate potential chemical “nasties” from the smoke – many people just don’t see incinerators as safe. Concerns over the likes of dioxins and furans and the lack of clear expert agreement over how serious such pollution issues really are have left the whole idea of incineration tainted with an image that it has not found easy to shake.

So, can incineration be an alternative to landfill? The answer to that has to be yes; in the UK we may historically have chosen to send 80 per cent of our waste to landfill, but in Belgium, Denmark, Sweden and Switzerland, around half of theirs is incinerated – and nearly three quarters of Japan’s waste too. Clearly, there’s no doubt it can be, but whether it ever will be for Britain, that is a very different question. Only time will tell.