Are Edible Wrappers the Future of Food Packaging? 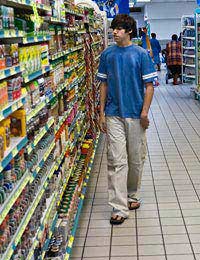 Food packaging often comes in for a lot of criticism and there’s no getting around the fact that much of it is deserved, particularly when it means that your tasty morsel is hidden beneath several layers of multi-material wrappers. The good news is that consumer attitudes form one of the most influential factors in how packaging technology in general develops – and nowhere has that been more apparent than in the food industry.

The market for food packaging is huge; globally it is predicted to rise to be worth $115 billion (US) by 2015 and in 2009, despite dropping slightly in the economic downturn, it was worth more than £5 billion in the UK alone. The upshot of all this is that there’s a massive amount of time and money spent researching how our food is packaged and with environmental issues forming one of the top purchasing priorities for the buying public, much of that effort is focused on developing greener packaging.

Coming up with packaging that can protect a product in transit, maintain its quality, extend its shelf life, look attractive at the point of sale, and still allow for a profit, while being either recyclable or, ideally, entirely biodegradable is a really tall order! Achieving it may not be easy, but edible wrappings are one solution that many people in the industry feel we’ll be seeing a lot more of in the future.

The idea itself isn’t particularly novel. These sorts of materials have been around for a long time, but what makes the latest generation particularly exciting is not so much that they’re edible – although that’s obviously important – but that they come with a whole new range of extra properties. If everything does pan out the way packaging researchers are hoping, these new wrappings will not only be protecting food, they’ll also be adding flavour, enhancing nutritional content and keeping bacteria at bay too. The way food is packaged could be about to change forever.

Plant essential oils have long been known to have anti-bacterial properties, but the idea of mixing them with edible coatings is a very new one – and it seems to hold a lot of promise. A recent collaboration between the University of Lleida in Spain and the US Department of Agriculture has successfully combined plant oils and dried films made from apple puree to come up with the world’s first natural anti-microbial food wrap. The team tested differing concentrations of three oils – oregano, cinnamon and lemongrass – against a potentially lethal strain of E.coli, with oregano coming out as the most effective, even low concentrations of the oil killing more than half of the bacteria in under three minutes. The slightly sticky character of the puree film also seems to be an important part of the effect, since it bonds very tightly with the food surface.

Coated foods are likely to have a slight apple and oregano flavour, but since the new wrapper is aimed at vegetables and salads, that might actually be a benefit and in any case, similar coatings can be made from a whole range of other vegetable or fruit purees. Taste-matching the coatings to other products is unlikely to be much of a problem.

If the promise of a fully biodegradable, naturally bactericidal wrapper isn’t enough, then there are other kinds being developed that can help enhance the nutritional value and quality of the food itself. Some of these which are intended for perishable products will provide a flavoured glaze that can be cooked along with the food to improve the taste of the finished meal. Other kinds of wrappers are also being investigated which will add minerals and vitamins, helping to ensure that the nutritional content remains high and providing an additional selling point in today’s ‘healthy-lifestyle’ market.

Will edible wrappers be the future of food packaging? The answer is probably no, at least not for everything, and even for the kinds of foods for which they are appropriate, they’re not going to be here for a while. Exciting though the prospect is, most of the development work is still in its very early stages, so conventional packaging is likely to be with us for some time to come. That said, a lightweight, biodegradable and essentially waste-free material sounds like the Holy Grail for packaging, so there’s little doubt, the day of the edible wrapper is definitely coming!