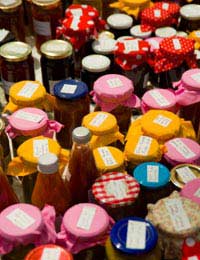 Ten years ago and almost no one had heard of food miles; today almost nobody hasn’t – and it has revolutionised the way a huge section of the population shops. Admittedly the concept isn’t without its flaws and, as its critics point out, it doesn’t reflect the full picture, but as an illustrative idea to get people thinking about the issues involved, it is hard to fault.

It is not only food however, that can sometimes travel staggering distances around the world; sometimes materials destined for recycling – and recycled goods themselves – also go on a bit of a journey to their final destination. Even when that doesn’t involve reclamation companies shipping items to the other side of the world for reprocessing, there are times when we ourselves add more than a little embodied transport energy into the equation, as we try to do the right thing for the planet.

It’s time to think about cutting those recycling miles.

One of the best ways to drive them right down is simply don’t recycle at all.

What’s that? Heretic! I hear you shout – but hang on a minute; nobody’s suggesting that you should go back to the days of just bunging everything in the bin and forgetting about it. Just remember your waste hierarchy, and choose to re-use, rather than recycle, wherever you can. Many of our grand-parents’ generation were finding inventive uses for old jam jars and discarded food containers long before the whole recycling thing became green, cool and trendy. Things haven’t changed that much in the intervening years and there’s still no shortage of useful ways that much of what we recycle can continue to be useful around the house, garden and garage.

Clearly, that sort of idea isn’t going to be possible – or even desirable – for everything. There is still always going to be a clear case for recycling what you can’t use yourself, but if an old coffee jar means buying one less brand new container made from virgin plastic, then that has to be a worthwhile result!

We’re all familiar with the idea of buying local as a way to cut down food miles and the same thinking applies to recycling too.

Fortunately most of the horror stories that used to hit the headlines fairly regularly a decade or so ago about local authorities transporting recyclables vast distances by road to reprocessing plants are largely a thing of the past, but it’s still worth checking. Of course, simple economics – not to mention the logistics nightmare that would be involved – dictates that every part of the country can’t have facilities to recycle everything on its doorstep, so some movement of materials will be inevitable. That said, burning gallons of diesel to ship things from one end of the country to the other hardly counts as much of an environmental “win”, so wherever possible, it is definitely something to avoid!

If you’re fortunate to live in an area where there’s a well developed local recycling market, channelling your materials here could go a long way towards cutting those recycling miles.

If you routinely take any materials – ones that the council doesn’t collect, for instance – to recycling facilities and bottle banks yourself, tying the trip in with another journey makes obvious sense. No matter how committed a recycler you are, there’s no point in driving even a few miles to do the “right” thing, with just a handful of bottles in the boot – there’s not much of a green gain there! If you either drop things in when you’re passing anyway, or only make a special trip when you’ve got a real car-full, the recycling miles per item will drop dramatically – and so, in all likelihood, will your fuel bill.

Recycling has become a big part of everyone’s life over recent years, and all the indications are that it’s going to play an even bigger role in the future. If we’re all going to be doing a lot more of it, then it makes sense to do it in the most environmentally friendly way we can – or else we run the risk of causing some of the problems we’re trying to avoid.

In the same way that we have all become aware of the idea of food miles and the green benefits to be gained from reducing them, if we can start to do the same thing when it comes to recycling, we could really be on to a winner.