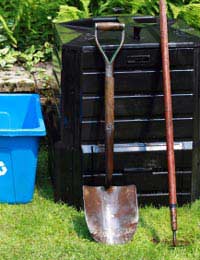 As a way to recycle the staggeringly large amounts of waste food, kitchen leftovers and garden refuse we generate annually, composting is big – and getting bigger by the year. Already it amounts to over a third of England’s total recycling effort – and a broadly similar picture emerges for the rest of the UK too – with more than 2 million tonnes of material being destined for centralised schemes alone!

The idea’s hardly a new one of course; gardeners have, after all, been using the process for generations to produce a nutrient rich growing medium and everyone knows about using compost in your pots and on your flower beds. All the same, there are a few benefits of this familiar substance that are not so widely appreciated, and which could leave you looking at compost in an entirely new light.

Some of them, at least on first sight, might perhaps seem a little surprising. One of the major hidden benefits that a good quality compost can bring to a poor soil, for example, is a thriving community of microbes and mini-beasts. Composting relies on a whole army of bacteria and fungi, not to mention beetles, worms and a whole host of protozoans to complete the various stages of the process. Add the finished product to the soil and, inevitably, you also add a small zoo of living things too – and there’s a huge body of research that shows they make a welcome and incredibly beneficial boost to soil fertility.

Between the bacteria breaking down organic material to release the nutrients and the improved aeration and drainage engineered by bigger beasts burrowing, a dose of healthy compost can make a huge difference – and that isn’t all. Some of the microbes can also help control certain plant diseases and pests too.

The ability of compost to improve soil structure is one of its most obvious benefits and as every gardener knows, if you work it in well over time, whether your soil is a heavy fine textured clay, or open and sandy, over time it becomes better and easier to manage.

What is less generally known is the remarkable way that compost can improve water-holding in a soil – and with hosepipe bans and droughts an increasingly common feature of British summers, that could be an important plus. Research has shown that under some conditions, compost can absorb and hold up to ten times its own weight in water – and a new study also suggests that it can play a major role in helping water move sideways through a soil, which obviously makes watering much more effective.

The main chemical benefit that a compost brings lies in the additional nutrients it makes available. While it isn’t a “fertiliser” in any meaningful sense of the word, a well made and properly matured compost brings a certain amount of nitrogen, phosphorous and potassium, but probably its greatest contribution comes from the micronutrients it carries – elements such as selenium, that are essential for healthy plant growth, but in very small amounts.

What makes compost additionally useful in this respect, is its ability to improve the cation exchange capacity of the soil – and the bottom line of that means it allows soils to hang on to their nutrients, resisting the tendency for them to be washed away and so making them available to plants for longer. For sandy soils in particular, this can represent another major improvement in soil fertility.

The benefits of compost don’t stop there. It is, for example, ideal as a substitute wetland soil – having featured successfully in a number of major reclamation and conservation projects around the world. It is very good for large scale landscaping schemes, its ability to resist rain impact makes it perfect in areas subject to heavy downpours and erosion, and it has even been used to help remediate contaminated sites.

Composting may be an ancient process, but it seems now is the moment for it to come out from behind the garden shed, and step into the limelight. One thing’s for sure, with so much organic waste to recycle, the move could hardly have been more timely.