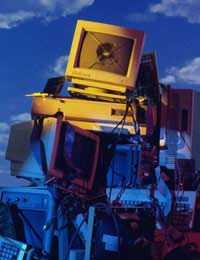 We are all involved in the revolution in consumer electronics, whether we have recently bought a new microwave, flat-screen television, or simply look with longing at the latest Apple Macintosh computer or IPod. There is now so much choice and range of appliances and gadgets, and so many different brands all competing for our spending power, that it is bewildering to think about it all. But what we as consumers so rarely consider is, what happens to the computer or walkman or HiFi unit that we discard when we want to upgrade and get the newer model?

Dealing with Electronics, or E-waste

As our love of and reliance upon these products has grown over the last 20 years, conversely the lifespan of the electronic equipment has shrunk. Discarded electronics have become the main category of waste at municipal waste disposal centres. It has expanded as a definable waste category three times faster than any other, i.e. much more than paper, metals, plastic or glass, and now makes up approximately 5 % of all worldwide municipal solid waste.

This e-waste is clearly poison for the earth: lead, mercury and other toxic substances leach out of these machines. The solid lumps of plastic do not biodegrade in landfill dumps, and consume space.

The average lifespan of computers in the Western world has dropped from an average of 6 years in 1997, to an average of 2 years in 2005. This rapid turnover has seen a massive increase in products flooding the market – 183 million computers were sold worldwide in 2004.

When it comes to replace a computer, think carefully about what to do with the old model. There are various schemes and enterprises which will accept working computers and donate them to various projects in developing countries. Check to see if these operate in your area. Many schools and businesses are aware of them, or your local municipal recycling officer should be able to give advice. Even if the computer is not working anymore, there will be components within it that can be salvaged and reused.

A European Union directive in august 2005; the WEEED (Waste Electrical and Electronic Equipment Directive), brought into law across the EU the requirement for all producers to take responsibility for their discarded products, so in theory, the makers will accept their broken computers back.

Test this out, and request that they reuse and recycle as many of the components as possible.

Check to see if your local charity shops accept old computers and electronic goods – even if they aren't working, some of the larger charities now have regional workshops where they repair or strip down equipment.

It is incumbent upon all of us to now act responsibly about waste, and think through the implications of purchasing something that could be obsolete in a few years. If we change our attitude when buying, and investigate how electronics can be recycled, and support this growing industry or recycling and reusing e-waste, either by donating equipment, money or time to it, then we will all play our part in acting responsibly for the planet and for all our common good. Share this knowledge!