Home > About Recycling > History of Recycling 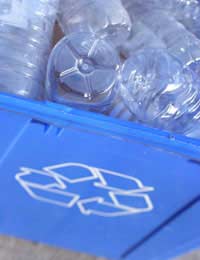 Recycling has been around as long as there have been humans to do it.

Taking a broad definition of recycling as reusing resources this has been one of the most basic human responses to living in the world, and learning to live, survive and indeed thrive by using, and then reusing, the resources we find around us. From the early days of mankind, when our ancestors were hunter-gatherers, evidence from this time shows the resourcefulness of early weaponry – using flints, both for fire and as tips for spears, and then becoming more sophisticated and using the parts of the animal that can't be eaten, the bones, for tools.

As hunter-gatherers 5,000 years ago, through to pastoralists, working the land and developing that into modern agriculture, and then through to surviving nomadic groups in the current age, in remote areas of Asia, the African sub-continent, and Arctic regions, reusing resources has always been vital. Traditionally, a wasteful society has always been one that would not survive – greed, coupled with an increase in leisure time would be its downfall. Mankind's innate ability to think, create and design, from early innovations like the wheel, through to the plough, was traditionally based upon using materials from local, immediate sources, like stone, wood, and bone.

It might be seen as a contentious argument, but mankind's turn toward wastefulness and move toward the easy disposal of resources, seems to have begun with the development of weapons of war. As Countries formed borders, and developed structures for the preservation and governance of themselves, and this led to both defensiveness and expansionism, so did it lead to the gradual wastage of resources. As technology developed, and agriculture also led to the growth and development of a consumer society, wealth – both personal and as a society (now known as GNP, or Gross National Product), has ultimately led to the disassociation of self from product. Or, the development of the modern consumerist society, where we buy goods without thought for their production or packaging.

Recycle... or be Buried in Waste

Mankind is now at a place where we see the dangers of our excessive lifestyle – a Century of wasteful and harmful use of resources is damaging our planet, and threatening our existence.

The ravaging effects of climate change is the extreme end of mankind's destructive output into the environment. Can we really justify the continued production of unnecessary containers and packaging, if our only solution once they are used is to bury them in the ground? This 'out of sight, out of mind' philosophy is starting to be seen for what it really is: short term, and ultimately harmful.

However, it is not all bad news. Traditions of recycling have continued throughout human societies.Some have never gone away, like composting, which converts food and plant waste into a natural, organic fertilizer to reinvigorate soil, and some new technologies have been developed to cope with newer materials, such as glass, and plastics. Ultimately, individuals in society must see the benefits and sheer necessity of being less wasteful with the earth's precious resources, and use powerful arguments to persuade others of this cause, and to push our creative and technological limits to develop ways of dealing with waste, and the by-products of our society. In other words, to live sustainably.